Oh my GOOD GOD, I’m so bored of standing around a bar, pub, or party with a drink in hand making polite chit-chat until the booze kicks in.  So it’s time to skip straight ahead to the fun on your stag party with our top five drinking games.  And I’m not talking about games with complicated wordplay or byzantine rules – the whole point is to drink and have fun doing it, too!  So all of the following games combine blokes’ competitive natures, alcohol, and little skill so everyone can play – even when incredibly sauced.

The King of Drinking Games.  I’d bet money that people have been playing this game in some form or other since somebody forgot to remove a bit of barley from some water and hey, presto! – beer was invented.  Just in case you’ve never played (really?  Do you hate life?) – here’s the how-to beer pong.

Perfect for pre-game or stag parties already at the bar.  Make a large circle with 30 shot glasses.  Fill the shot glasses with a combination of different alcohols and non-alcoholic drinks.  Take turns spinning the bottle in the center of the circle.  Drink whatever glass the bottle lands on.  Can’t picture it?  Here’s a helpful photo: 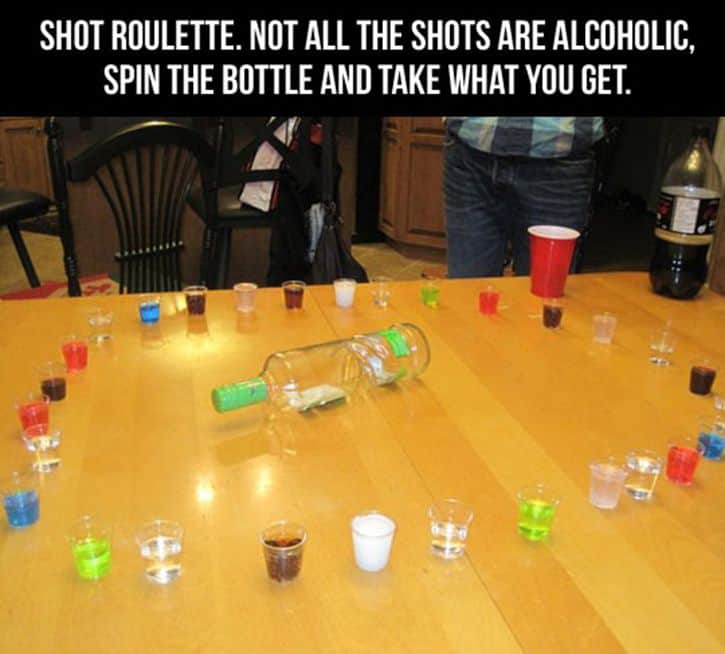 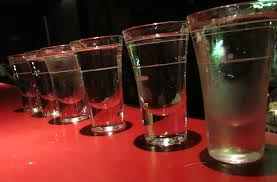 water”.  Can’t keep a straight face or aren’t convincing?  Your “punishment” is another shot.

Kings - a card based stag do drinking game

This one is a card-based game but we’re confident you’re smart enough to pick it up pretty quick.   Players’ actions and drinks are associated with the facedown card that they randomly select each turn. The set-up: Place an empty cup in the middle of a table with a pack of cards, facedown, spread around the cup.  Each player takes it in turn to choose a random card. Card guide:

2: You: Whoever drew the card assigns a drink to another player. 3: Me: Whoever drew the card, takes a drink. 4: Floor: Everyone races to touch the floor, last person to do so drinks. 5: Guys: All guys drink. 6: Chicks: All girls drink.  (For stag parties: Dicks, all guys drink) 7: Heaven: All players point towards the sky, last player to do so, drinks. 8: Mate: Pick a person to drink with. 9: Rhyme: Say a phrase, and everyone else must say phrases that rhyme.  Those that can’t, drink. 10: Categories: Pick a category, like cars.  You and everyone playing the game have to name a type of car.  If you can’t, you drink. Jack: Social: Everyone drinks. Queen: Question: The person who drew the card asks a random person a question, and they then ask a random person a question, until someone loses by either failing to ask a question or by responding to the person who just asked them a question.  You lose by answering the question, get it?  Then you drink. King: Make a rule that everyone must follow until the next King is drawn (i.e. force everyone to drink after each turn). Ace: Waterfall – Every player begins drinking starting with the person that drew the card, and no one can stop until the player before them stops.  The person that drew the card cannot stop drinking until the last person stops drinking. Joker: Chug:  You picked it, you chug your entire drink.

Flip-Cup - a stag do drinking game for teams

Two teams face off across a table, a cup of beer standing in front of each contestant.  The first player on each team downs their drink and then attempts to flip it up and over so that it lands face down on the table, sitting on its mouth.  Upon each successful cup-flipping, play passes along until every player in the team has completed their go.  Whichever team finishes drinking and flipping first is crowned the winner. Can’t picture it? Here’s a helpful video: And those are our five favourite drinking games to help make your stag do a raucous time!  Right here is where I’m supposed to say please drink responsibly, but if you’re playing these games well, that’s not really going to happen is it?